The Samburu people live just north of the equator in the Rift Valley province of Northern Kenya, where the foothills of Mount Kenya merge into the northern desert. They are one of the most fascinating Kenya tribes, semi-nomadic pastoralists that are related to but distinct from the Maasai.

Neighboring tribes, admiring the beauty of these people, called them Samburu, which is said to translate to butterfly. The Samburu, however, refer to themselves as the Lokop or Loikop. 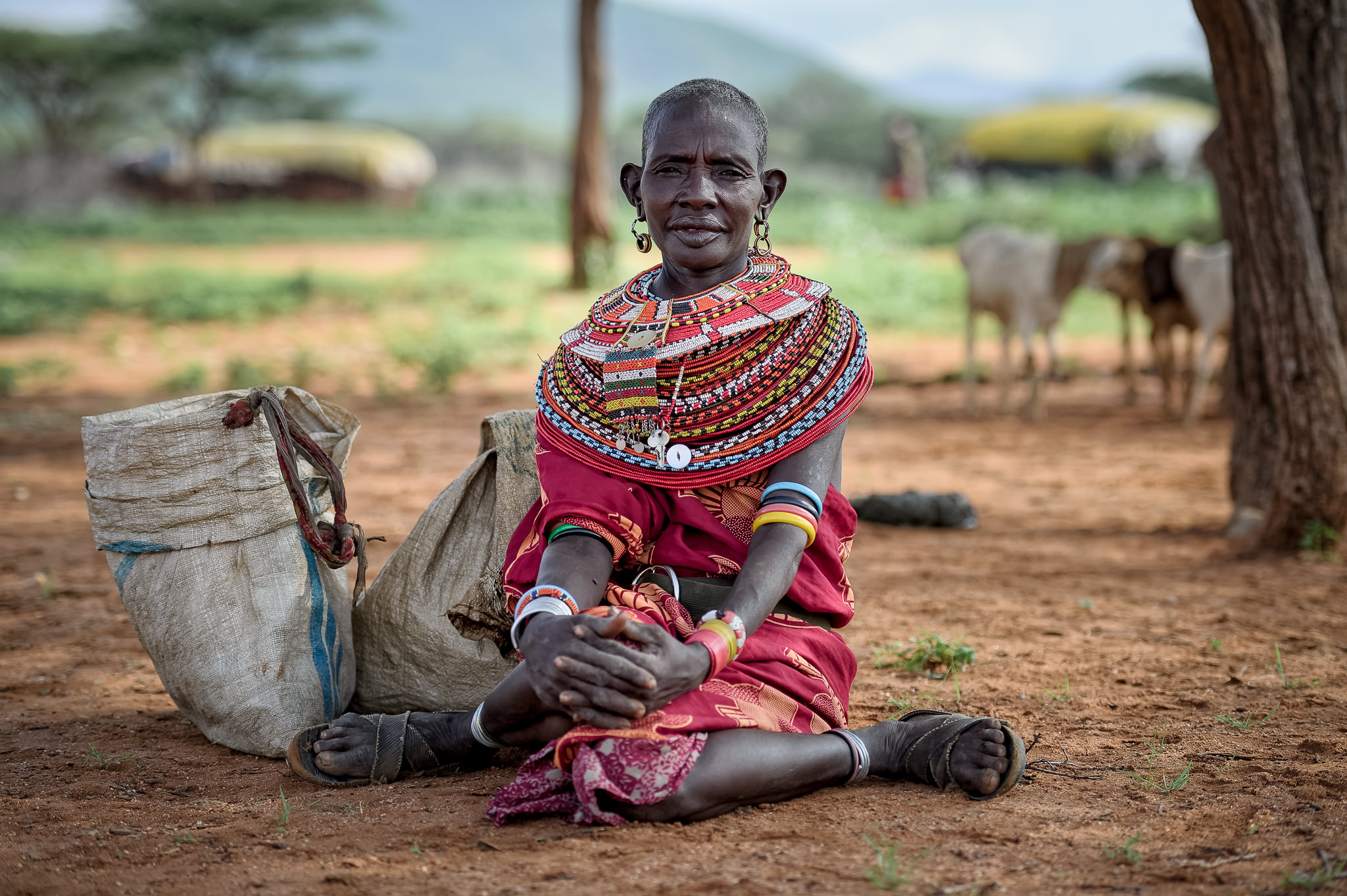 There is something very butterfly-like about them, the young warriors appear strikingly effeminate, almost fragile in their slenderness.

The Rift Valley province in Kenya is a dry, somewhat barren land, and the Samburu have to relocate to ensure their cattle can feed. Every five to six weeks the group will move to find fresh grazing grounds.

Their huts are built from mud, hide and grass mats strung over poles, and they build a thorny fence around their huts for protection from wild animals, usually living in groups of five to ten families. 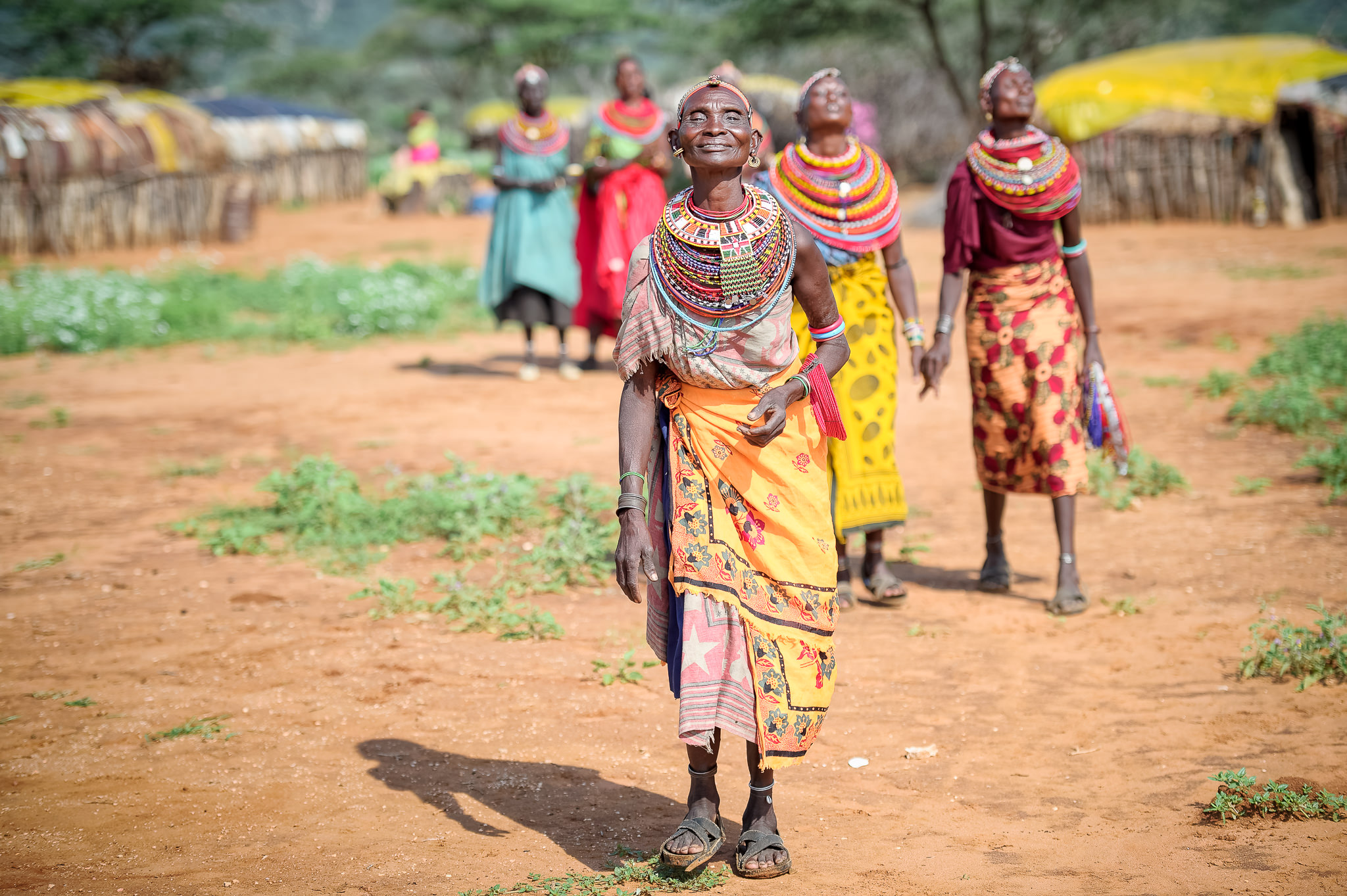 Traditionally men look after the cattle and they are also responsible for the safety of the tribe. As warriors they defend the tribe from attack by both man and animals. Samburu boys learn to tend cattle from a young age and are also taught to hunt. An initiation ceremony to mark their entry into manhood is accompanied by circumcision. 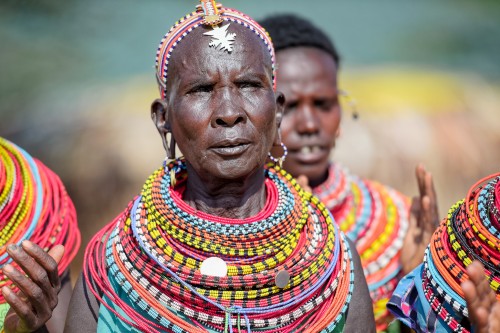 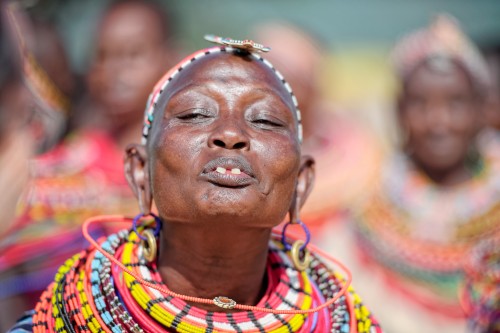 Samburu women are in charge of gathering roots and vegetables, tending to children and collecting water. They are also in charge of maintaining their homes. Samburu girls generally help their mothers with their domestic chores. Entry into woman hood is also marked with a circumcision ceremony. 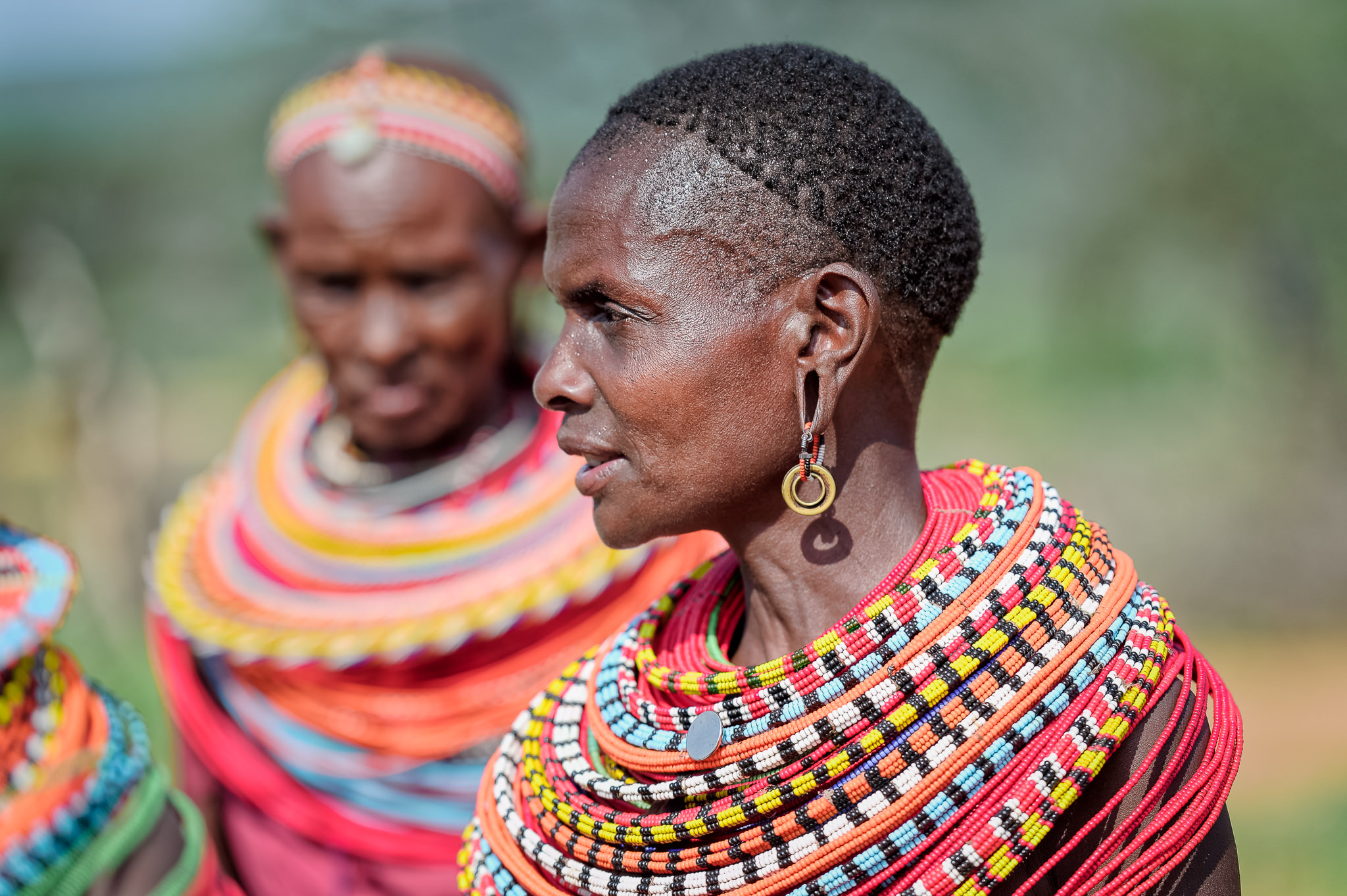 The Samburu women have a remarkable sense of style and sophisticated dressing. They wear colorful cotton sheets called khangas and complete their look with earrings, bangles, armlets and elaborate necklaces.

Samburu beading is essentially similar in design and style to Maasai beadwork. It is produced by the women, to be worn by both sexes. Samburu, women, however, do not wear the distinctive large flat necklaces of the Maasai. 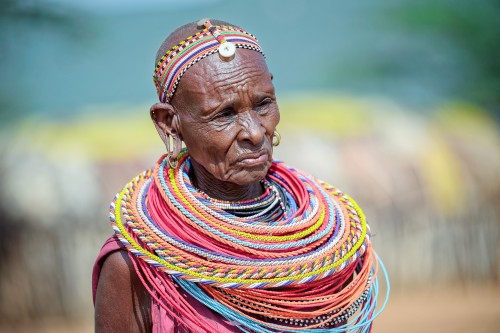 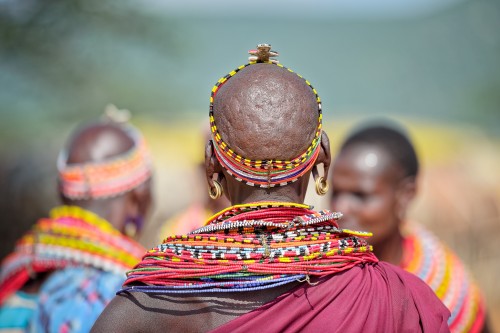 Instead, from a young age girls are given single loop bead necklaces by admirers, chiefly young Morans. These gifts are given frequently and generously by young Samburu men, and the necklaces soon merge to form a beautiful thick collar of intricate beadwork.

Samburu people believe that by the age of 15 or 16, a girl should have enough beads to support her chin. This is considered a sign of having reached marriageable age. 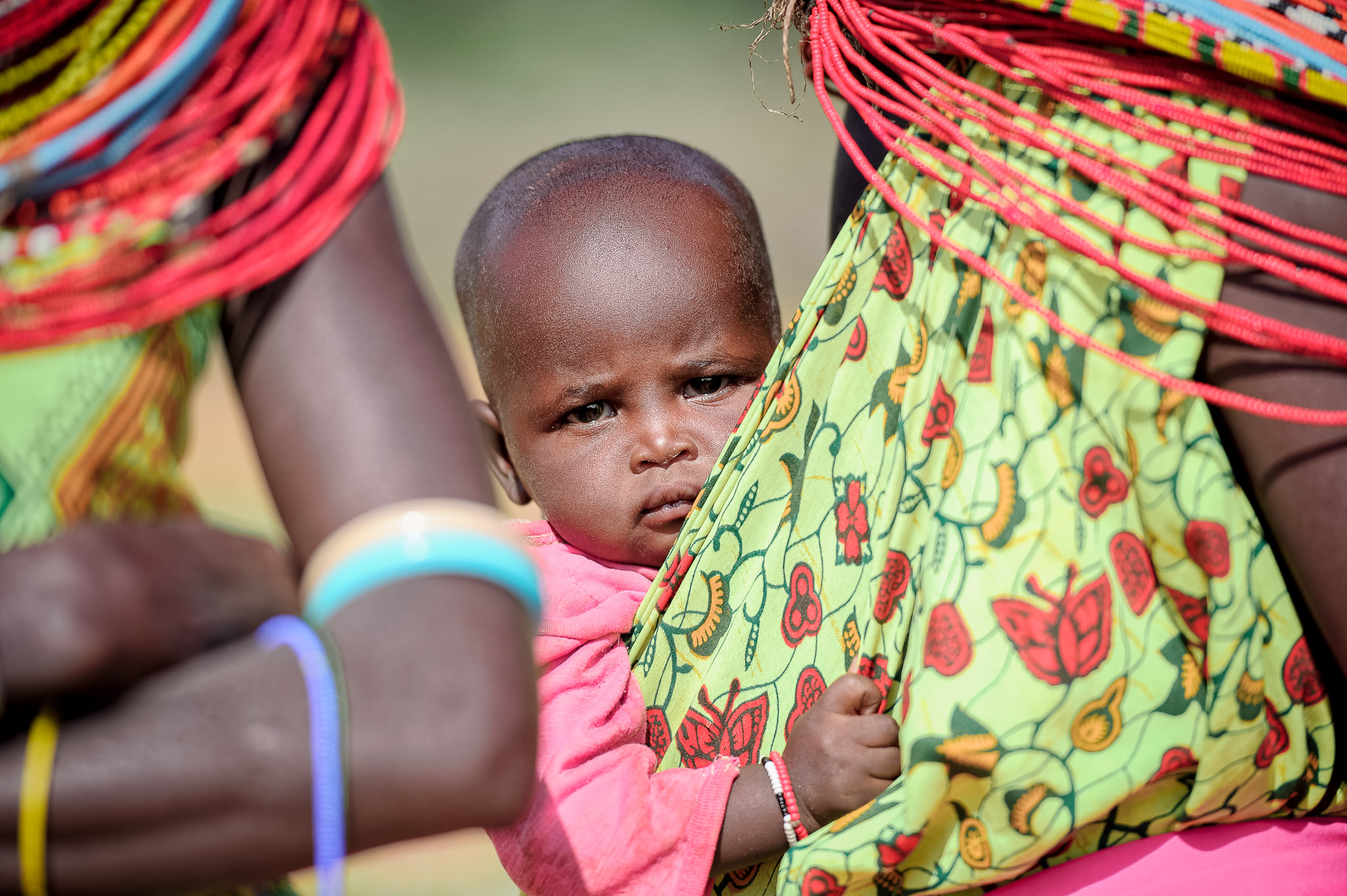 Dancing is very important in the Samburu culture. The chants and dances of the Samburu are similar to those of the Maasai, and as in the Maasai communities, the blessing of cattle, the preparation for war, and victory in a hunt are all causes for celebration and dance.

The Samburu people have traditionally not used any instruments to accompany their singing and dancing.

The central musical motif of Samburu dances is a deep resounding male vocal, a rhythmic chanting not unlike the territorial call of a lion.

Warriors dance with a series of spectacular vertical leaps, encouraged by the cries of other warriors. Men and women do not dance in the same circles, but they do coordinate their dances.

Likewise for village meetings, men will sit in an inner circle to discuss important matters and make decisions. Meanwhile, the women sit around the outside and interject with their opinions.

As with many traditional tribes, today the Samburu people are under pressure from their government to settle into permanent villages.

They have been extremely reluctant to do so since obviously permanent settlement would disrupt their entire way of life. The area they live in is very arid and it’s difficult to grow crops to sustain a permanent site.

This means the Samburu will inevitably become dependent on others for their survival. Since status and wealth in Samburu culture is synonymous with the amount of cattle each family owns, a sedentary agricultural lifestyle is not in the least attractive to them. Many Samburu families who have already been forced to settle will often send their adult men to the cities to work as guards. This is a form of employment that has evolved naturally because of their strong reputation as warriors.

Today, many Samburu are fighting to retain their land and grazing rights, so that they may continue living their ancestral way of life.